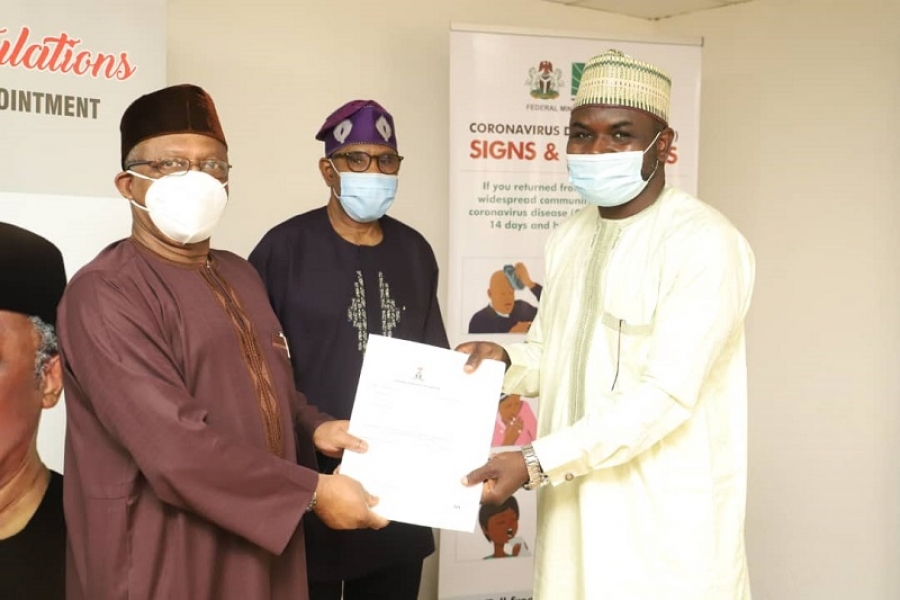 The Honourable Minister of Health, Dr. Osagie Ehanire has conveyed the approval of President Muhammadu Buhari, GCFR to Dr. Yusuf Bara Jibrin who has been appointed as the Chief Medical Director of Abubakar Tafawa Balewa Teaching Hospital, Bauchi (ATBUTH), Bauchi State for a term of 4 (Four) Years with effect from 9th September, 2020 at a brief ceremony held 2nd October, 2020 at the Honourable Minister’s Office.

While conveying the President’s approval to Dr. Jubrin, the Honourable Minister had the Honourable Minister of State, Dr. Olorunnimbe Mamora in attendance along with the some Directors of the Federal Ministry of Health:  the Director, Hospital Services, Dr. Adebimpe Adebiyi, mni; Director, Teaching Hospitals Division, Dr. Ngozi Onwudiwe and the Director, Media and Public Relations, Mr. Olujimi Oyetomi who were each given the opportunity to share some nuggets with the newly appointed Chief Medical Director.

First to advise was the Director, Teaching Hospitals Division, Dr. Ngozi Onwudiwe who did not only congratulate the appointee but also charged him to see his new appointment as a heavy responsibility alongside an honour.

She charged him to ensure that the system at the ATBUTH is made better.  “Make it better; make services available to our people; form a team with your worker as there are so many professions in the health system, and for you to succeed, every profession must be carried along.  You are the CMD of everybody, you are not the CMD of Doctors or Consultants, whoever works in that hospital is your staff.  Carry along your Board and carry along the host community for you to succeed. So, let’s have you in the next 4 years when you bring the report of your first 4 years, we will be able to see encyclopaedia of achievements.”

The Director of Hospital Services, Dr. Adebimpe Adebiyi, mni toed the line of Dr. Ngozi Onwudiwe but departed when she charged the new CMD of ABTUTH by asking him to learn from his predecessors who were praised or reprimanded for.  She charged the new CMD to in particular mind the rules.  “If you go by the rules governing that office, you will always get it right, you will not get it wrong”, she admonished. “There are Public Service Rules, Financial Regulations that you must always ensure that you align your actions, your activities, your decisions with.” 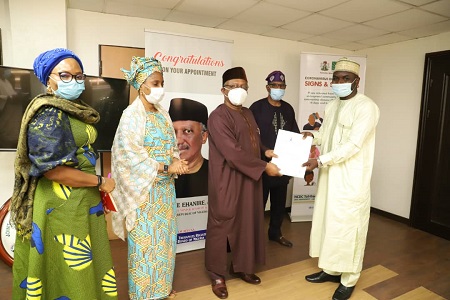 The Director, Media and Public Relations of the Ministry, Mr. Olujimi Oyetomi was also requested to advise the new CMD on aspect of Public Relations.  He advised that “the CMD should not play down the opportunity of clarifying issues which the Media may approach him to clarify.”  He requested the new CMD to “accommodate the Media” and if his time is so taken up by routine matters, he could “delegate the responsibility of response to the Media to a trusted person who could speak to the issue rather than allow rumour to thrive in place of the facts and the truth.”

He also charged the new CMD to realize that he is not the only one qualified to be appointed to that office and therefore must administer justice and fairness to everyone.
“In trying to administer justice to all, also know that you may not come out perfect; you cannot satisfy everybody.  Also, bear it at the back of your mind that someday, you will leave.  So, what you will be remembered for is the legacy you leave behind.  So, it is now left for you to choose which legacy you want to be remembered for.”

The Honourable Minister, Dr. Osagie Ehanire summed up by charging Dr. Jubrin to note that “the greatest challenge” for him is in “Management.”   You will be managing materials, money, and above all, you are managing human beings.”  “Human being is the most difficult.”

Dr. Ehanire asked that the new CMD of ATBUTH must know that this position (he has been appointed to) “is not personal to you.”  “You are managing on behalf of the Ministry of Health; the Ministry of Health is managing on behalf of the President.”  “You must know that your appointment was approved by somebody.  Whatever you do, we take responsibility, and ultimately he (The President) takes responsibility.”

The Honourable Minister further charged the new appointee to accord everyone their deserved respect and make everyone to work as a team and get along with the technocrats, the politician and everyone else on his Board.

In response, Dr. Yusuf Bara Jibrin expressed appreciation for all the nuggets and pledged to put his best foot forward as he goes on to start work at his new duty post.