Storage In Warehouses Are Strategic For Emergencies, Stop Crashing Them, Dr. Ehanire Urges Edo Youths & Others 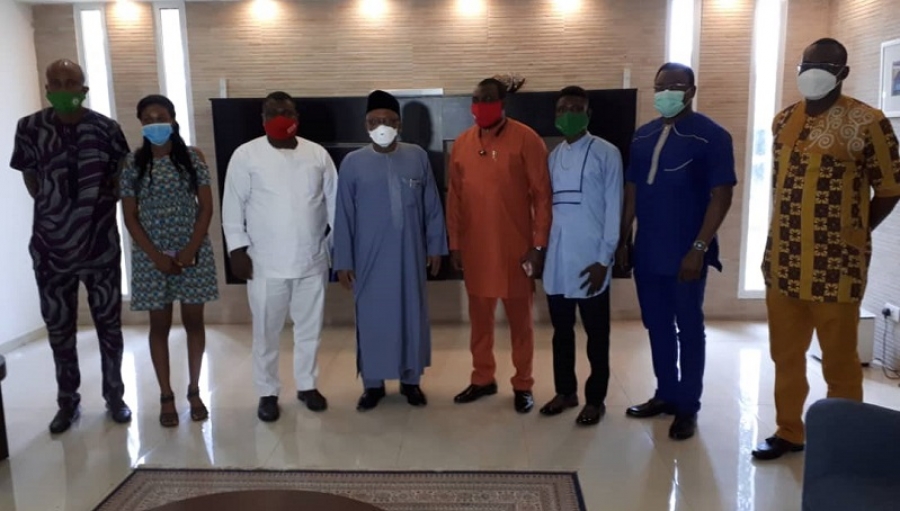 Photograph of NYC Edo State Chapter with the HMH on Sunday, 25th October, 2020.

The Honourable Minister of Health, Dr. Osagie Ehanire has pleaded with youths of Edo State through the National Youth Council, Edo State Chapter to refrain from destructive protests and crashing Government warehouses in the State as the food items stored in those warehouses, from what he knows, are not all for COVID-19 palliative but also strategic warehousing to help victims of emergencies of flood, fire outbreaks, and those who may not be able to help themselves when emergencies occur.

“From what I know, the palliatives were not being hoarded as widely believed,  they are strategic food reserves and were deliberate Government policies to help those who may come to situations where they may not be able to help themselves.”  Government, the Honourable Minister said, need to be prepared ahead of emergencies, because when they occur and Government is caught napping, money even when available will not be able to get the foods to be supplied because the markets also would have been closed.

Dr. Osagie Ehanire, the Honourable Minister of Health who is from Edo State, retreated to Benin City to engage in fatherly conversation with Edo youths through the National Youth Council, Edo State Chapter led in by their president, Comrade Osahon Obasuyi who came with the Executives of the State Council composed of Barrister Rose Emmanuela  Ukhun, Comrade Emhonbotiti Eghonghon Charles, Ogiehor Ehis Tornado and Edo Shedrack Osamuyimen.

The conversation by the Honourable Minister with the Edo youths took place in Edo State Government House, Dennis Osadebey Avenue, Benin City, Sunday, 25th October, 2020 and the youths who highlighted a lot of issues bothering them expressed the wish not only to have more of the conversation in the future, but told the Honourable Minister that the lack of such is reason why the youths took to the street.  The engagement forum expressed regrets that the legitimate protest of the youths which was hijacked led to the regrettable extent to which it went.

Dr. Ehanire seized the opportunity of the conversation with the youths to express it on them that Government has been facing resource generation challenge in the face of several plans which it has been executing to ensure that the Nigerian society is conducive for youths and other citizens. He disclosed that COVID-19 which no one expected came to compound the social and economic situation of the Country.  The Honourable Minister therefore appealed to the youths to join Government to build and find opportunities to complement private sector and self-initiated ones for the youths.  He also appealed to the youths whom he noticed already have general education to seek specific selling skills to help themselves as Government; he said may not be in a position to employ every youth who are in need of employment.

The Edo Youths have engaged the Honourable Minister of Health, Dr. Osagie Ehanire in a free-flowing conversation lasting well over two hours in which they highlighted several issues which include a wish to be partner with the elderly ones in Government rather than being largely excluded over time; frequent conversation engagement with their representatives in Government; Constitutional review which would favour the youths; review of job placement policy which does not favour the youths who have been delayed at schools due to frequent strikes by their lecturers and several other demands.

Dr. Osagie Ehanire who disclosed to the youths, the positive impression they registered on him by the way they drove the conversation advised them to also consider intellectual engagements with the elders and Government functioners while appealing to them to calm down and not continue crashing Government and private warehouses and assets because the assets are for public good.

Ehanire: No New Confirmed Case Of COVID-19 In Nigeria