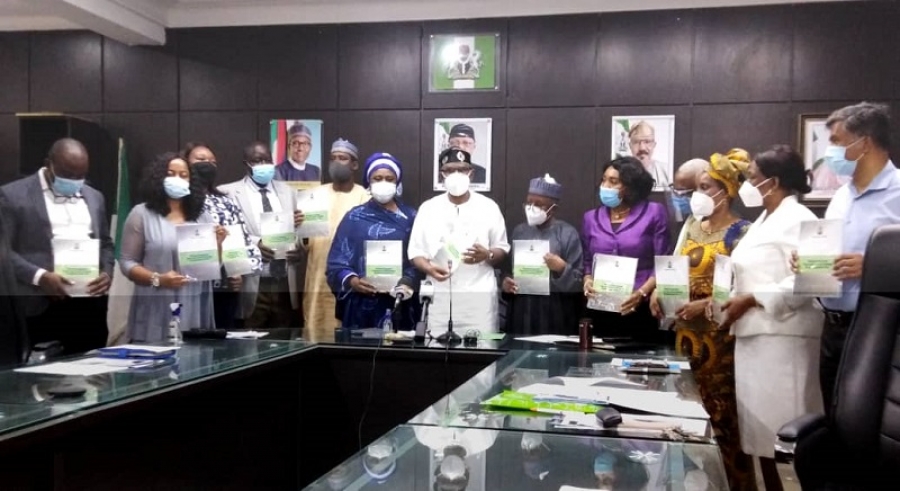 Presentation of the National Pneumonia Control Strategy & Implementation Plan by the HMSH, Dr. Olorunnimbe Mamora with Directors of FMOH, Heads of Agencies of the Ministry and Partners from WHO, UNICEF, SCI, CHAI, USAID and NEST360.

The gloomy picture of death taking the life of a child every 20 seconds in Nigeria can be ameliorated if only stakeholders and partners in the health sector adopt “effective case management, promotion of exclusive breastfeeding, reduction of indoor air pollution, and full immunization against communicable diseases” as well as some other measures.  The country also need to ensure a reduction target of less than 15 and 25 deaths per 1000 live births respectively to arrive at its target on Neonatal and Under-Five Mortality reduction.

These were the submissions of the Honourable Minister of State for Health, Dr. Olorunnimbe Mamora while addressing pressmen to mark the 2020 World Pneumonia and Prematurity Day, on 12th November, 2020 at the headquarters of Federal Ministry of Health, Abuja.

Dr. Mamora who described the theme of the 2020 World Pneumonia and Prematurity Day as “Fighting childhood pneumonia: emerging global health issues” as being apt, disclosed that Nigeria records about 143, 000 Under-Five deaths due to pneumonia annually.  He also added that pneumonia “along with other childhood killer diseases (is) still responsible for the observable high Under-Five Rate of 132 in 1000 live birth.”

The Hounourable Minister of State further identified a need to put a check on mother-to-child transmission of HIV as well as promoting regular hand washing, which he said are “happily brought together with other critical services” and interventions under what is called the “Nigerian Integrated Pneumonia Control Strategy and Implementation Plan” to create healthy environment, promote best practices known to protect children from pneumonia and ensuring that every child has access to proven and appropriate preventive and treatment measures.”

On prematurity, which Dr. Mamora identified as one of the top three killers of new-borns, he recommended the adoption of “Kangaroo Mother Care (KMC) for small babies” in Nigeria as “a much needed intervention.”  The Honourable Minister said this intervention of KMC already has “overwhelming evidence of proven efficacy” saying that “The evidences of additional neurocognitive advantages of KMC over incubator care have now evolved to the level that even those in developed clime have started adopting this method of care as an adjunct to institutional incubator care.”

Earlier, the Permanent Secretary, Health, Mr. Abdulaziz Mashi Abdullahi, while welcoming pressmen and guests to the press briefing pointed out that the Joint commemoration of World Pneumonia and Premature Day on 12th November began in 2009 to raise awareness and promote interventions aimed at preventing and managing childhood pneumonia.  He expressed regrets that pneumonia kills 800, 000 lives of the World Under-Five children annually and 2,000 lives on daily basis.

Mr. Abdullahi predicted that the most deprived and marginalized children from the poorest families living in Low-Middle-Income (LMICs) are likely to die before their 5th birthday in relation to children from wealthier families.  He puts the basis of his prediction on inequalities and poor access to quality health service.  He then asked the health authorities and partners to accept the challenges to help this vulnerable group.   The Permanent Secretary also rightly attributed Neonatal deaths to three major causes:  “prematurity (31%), intrapatum complications including birth asphyxia (31%) and sepsis (22%) stating that Neonatal deaths contribute 32% to Under-Five mortality.”

Goodwill messages at the press event were expressed by FCT Secretary for Health, Dr. Mohammed Kawu and representatives of WHO, UNICEF, SCI, CHAI, USAID and NEST360.