Minister Charges Federal Medical Centre Board, Management On Peaceful Resolution Of Issues With Host Community, Others

The Honourable Minister of State for Health, Dr. Olorunnimbe Mamora has charged the Board and Management of Federal Medical Centre Lokoja to amicably resolve all issues with its host community.

Dr. Mamora made this charge when he paid an inspection visit to the Federal Medical Centre (FMC), Lokoja on the 17th of November, 2020.  The Minister disclosed that his visit was a scheduled one meant to resolve the long standing issues the hospital has been contending with.  It may be recalled that in June, 2020, routine services at FMC Lokoja was brought to a halt due to series of agitations, violence and invasion by unidentified gun men.

The Minister of State for Health, further said that his visit was meant to get the medical centre to restart its operations fully: “We want to be sure that FMC Lokoja is in right standing with the Governor of the State because you stand to benefit a lot.  I must use this opportunity to acknowledge what the State Government has done in terms of assistance to this place and stand to benefit even more as a function of good relationship with the State Government. I know so many FMCs that have benefited from their State Governors”, the Minister stated.

Dr. Mamora expressed the wish to have visited the medical center earlier than he did but couldn’t because of the COVID-19 pandemic which he said disrupted plans for many persons and institutions, “When we thought we were getting away from that, another tragedy struck, the #ENDSARS protest.  All along, it’s been on my mind to visit here, you will recall that since the outbreak of the pandemic, we have transited into what is called the new normal, in which case, the bulk of our activities have been online.”  When the situation got so bad as to necessitate the downing of tools and suspension of full services here, expectedly we got worried not just at the Federal Ministry of Health but at the Presidential Task Force (PTF) level, because we felt we were in a period where all hands must be on deck, a pandemic where all health institutions must be up and doing, that was not the best time to have a shut down; but not due to your own fault, but rather as dictated by the circumstances that you were confronted with in that situation.

“This is a solidarity visit to all of you and to say that we share your pains, we share your anxiety, but most importantly, we feel for people out there, patients and clients that ought to have benefitted from the purpose of your being here as FMC Lokoja. 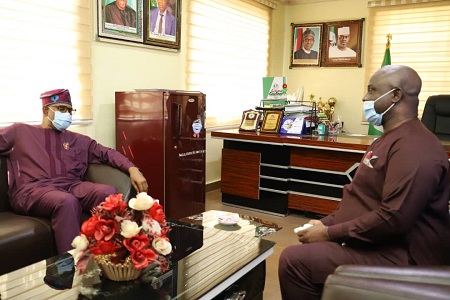 Dr. Mamora informed his audience that he has had series of engagements both physically and on phone with the State Governor and the Commissioner for Health, to find an amicable way of resolving whatever issues are on ground at the Centre. He charged Dr. Audu the Commissioner for Health in Kogi State to make a commitment to the audience since he’s representing the highest authority of Kogi State Government to the effect that issues affecting the Centre will be resolved.  The Honourable Minister of State encouraged all to “leave the past in the past and to have a new beginning and that whatever is happening now shall pass, FMC Lokoja shall be great again.”

The Commissioner for Health, Dr. Saka Haruna said FMC Lokoja is the highest care giver in Kogi State, and its closure then affected the State Government and the community at large, but despite the closure, the Government has gone to all villages to screen the people for COVID-19.  “We must play our roles to stop needless conflicts.”  He stated further that the visit by the Honorable Minister is an opportunity to ask for more services.  He informed that the Governor has been in the forefront of the conflict resolution but quite unfortunate that the conflict is being mingled with COVID-19.  He thanked the Minister of State for Health, for the fatherly role he has played and that the State Government will ensure that the conflict is resolved.

Those present at the visit event  include the Medical Director, FMC Lokoja, Dr. Olatunde Alabi, the Senior Technical Assistant to the Minister of State, Dr. David Atunwo and other senior staff of the Federal Medical Centre.