The FG-owned Federal Medical Centre, Katsina which started out in 1986 as the State General Hospital has transformed from that status to the State-owned Medical Teaching Hospital of the Umar Musa Yar’Adua University, Katsina effective from Tuesday, 8th December, 2020 when the Federal Government Representative, the Honourable Minister of Health, Dr. Osagie Ehanire and the Governor of Katsina State, H.E. Aminu Bello Masari signed a Memorandum of Understanding to that effect.

The signing of the Memo was done at the Honourable Minister’s Conference Room at the Ministry’s Headquaters and was coordinated by the Legal Adviser to the Federal Ministry of Health, Barrister Saidu Diri who highlighted three main areas of the M.O.U which he described as very important:  The Purpose, he said is for the upgrade of the Federal Medical Centre, Katsina (FMCK) from that status to the new status of a Teaching Hospital for the purpose of medical training of students; Duration, which he revealed is for 15 years and the Arbitration in case of dispute where he said the parties to the M.O.U cannot hurry to go to Court. 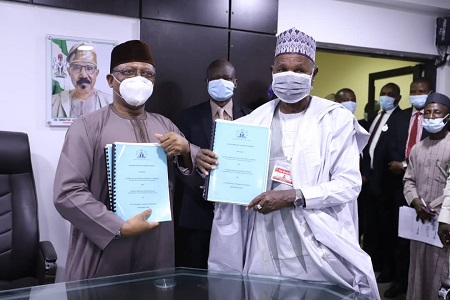 The highlight of the event was the signing of every page of the M.O.U by the Honourable Minister of Health, Dr. Osagie Ehanire for Federal Government and H.E. Governor Aminu Bello Masari, who led in a retinue of Katsina State Elders and Very Important Personalities with interest in the transformation of that FMCK to its new status of a Teaching Hospital for the benefit of the people of Katsina State. Dr. Osagie Ehanire told his visitors that the FMCK already has a full complement of Medical Trainers who would be ready assets for the new Teaching Hospital and “you could have more.”

The Honourable Minister of State, Dr. Olorunnimbe Mamora who was at the event congratulated the Governor and his entourage on their new gain and asked that the Governor build on his many visions and achievements for the people of Katsina while the Permanent Secretary Health, Mr. Abdulaziz Mashi Abdullahi who has the pleasant coincidence of being an indigene of Katsina State and the incumbent Permanent Secretary in the Federal Ministry of Health when his state of origin was making the impressive gain of a Teaching Hospital from the FG expressed delight at the M.O.U signing event.